The militant women’s group GABRIELA vowed to give their full support to Nanay Melly, the mother of the 22-year old Filipina raped by a US soldier in Okinawa, Japan, in their quest for justice.

“A mother’s determined fight for justice for a daughter violated deserves the full support of the public,” said Joms Salvador, GABRIELA spokesperson in a press conference this morning.

“’Hazel’ is the epitome of a good daughter who sought employment abroad to support her family only to be brutalized. Yet, despite her trauma and agony of being far from her family, and knowing the odds of fighting a rapist soldier backed by the super power US and the Japanese government, Hazel exemplifies the bravery of a Filipino and is now courageously taking on this fight,” added Salvador.

The women’s group commended the resolve of ‘Hazel” and her family. Salvador noted that the victory of justice in the Subic rape case – a first in the history of legal fights on crimes committed by US soldiers in the Philippines – was founded on the united strength and determination of Nicole and her family and the support of the Filipino people.

“In the case of Hazel, we must amplify and intensify the people’s unity to fight for justice. The rapist soldier who violated Hazel will do anything to absolve himself of his crime. He has the support of his government, unlike Hazel who, seemingly, has been abandoned by the Philippine government,” said Salvador.

“The government’s neglect of Hazel is not surprising given the Arroyo government consistent betrayal of the Filipino people’s interest. This government robbed the people of our victory when they turned over the rapist soldier Daniel Smith to US custody.”

“We must all bear in mind that this is not just Nanay Melly’s fight for her daughter. This is the fight of all women for the respect of our rights. This is a fight of all Filipinos against the violation of our dignity as a people. This is a fight of an aggrieved people against a super power military that deems it can get away with brutalizing other people.” ###

Popular television and movie actress, Angel Locsin, celebrated her birthday this year with the children of Payatas and other children of GABRIELA members from urban poor communities in Metro Manila. This is the second year that Angel Locsin opted to celebrate her birthday for a cause. The following is GABRIELA’s statement on the occasion. 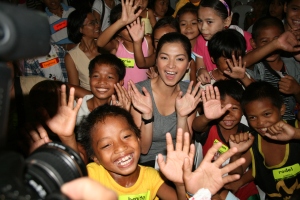 GABRIELA National Alliance of Women expresses its deepest gratitude to actress Angel Locsin for spending her birthday and sharing her good fortune with the more than 300 poor children from Payatas and other communities in Metro Manila.

. In this time of crisis, it is highly admirable that someone who enjoys the good fortune of being a popular television and movie actor would look beyond herself and choose to impart her blessings with the less privileged.

On March 8, 2008, Filipino women once again call for a militant commemoration of the International Women’s Day to honour the day of working women. The women’s militancy to demand change and fight for their rights roots back from the historical condition of oppression and inequality of women. For working-class women, this meant inhuman and slave-like conditions in the form of feudal and capitalist exploitation.

One hundred years ago, on 8 March 1908, 15,000 women marched through New York City to demand shorter work hours, just pay and the right to vote. In the same year in Europe women also set up strikes, protested against welfare cuts and campaigned for equal pay and unionization.

In the Philippines, women’s participation has always been significant in the people’s historical struggle for sovereignty and against oppression and exploitation. Filipinas first commemorated International Women’s Day in 1971 at the onset of the dictatorial rule of Ferdinand Marcos. With the establishment of GABRIELA in 1984, women under the alliance continued the militant tradition of commemoration IWD from then on, recognizing the contribution of millions of working women’s struggle in the past. ns.

Today, Filipino working women carry on the struggle at a time of worsening economic and political crises under the 7- year Macapagal-Arroyo regime – a regime most subservient to US imperialist dictates, most corrupt and tyrannical, and almost equal the Marcos dictatorship in its fascism.

The Arroyo regime boasts of a growing Philippine economy, citing the increase in the country’s Gross National Product and the strengthening of the peso against the US dollar. The regime further claims that a diminishing hunger incidence as shown in the last quarter of 2007 survey was due to her good governance and the success of the hunger mitigation program that she started in 2005.

The concrete experiences of majority of the Filipino people, especially women who bear the brunt of hunger and poverty, proved the Arroyo regime’s declaration of progress a lie. For the Filipino people, there has been no meaningful development amidst the economy’s continuing deterioration.

The government’s development program such as the Hunger Mitigation Program is nothing but mere attempts to cosmetize its utter failure to resolve the fundamental problems of the Philippine economy.

The Arroyo government’s ever-ready compliance to policies of imperialist globalization leads to the bankruptcy of the country’s industry and agriculture, which in turn, causes the widespread dislocation of workers and farmers. Even owners of small businesses bemoan the weight of the crisis and its adverse effects on their businesses and investments.

Reality also runs counter to the Arroyo political clique’s propaganda of good governance. Arroyo and her political clique are being hounded by unending scandals of corruption and abuse of authority. Adding to these scandals involving the president, her husband and their close allies are recent revelations of corruption and kickback in the ZTE-NBN Broadband project and cases of bribery in Malacañang and Congress coinciding with a move to consolidate the administration block to ward off a impeachment case against the President. Yet in all these corruption scandals and anomalies, not one of those involved was ever tried, much less punished.

The worsening economic crisis leads to further deterioration of Filipino women’s social status. Household work remains the woman’s individual responsibility while the crisis further compels women to seek livelihood to augment the family’s income. And yet feudal patriarchal relations between men and women remain and society, in general, continues to view women as inferior and second-class citizens. The number of women victims of sexual abuse both in the country and abroad continues to rise.

Majority of poor women work as farmer tenants, seasonal plantation workers or contract workers in the manufacturing industry and burdened by low wages, absence of benefits and job insecurity. As primary homemakers, women resort to ingenious ways to earn extra (providing laundry services, vending food in the streets, etc.) or to seek work overseas. In fact, majority of present-day Overseas Filipino Workers are women, who are in jobs most vulnerable to abuse, such as domestic workers and entertainers.

No amount of propaganda or manipulated statistics could conceal the intensifying poverty of the Filipino people. And women bear the brunt of the severity of this crisis.

Effects of a plummeting economy and livelihood push urban poor families towards further misery. While they suffer from the uncertainty of irregular source of livelihood, their homes and communities are being demolished to give way to so-called urban development projects ostensibly for the benefit of merely a few. Rather than a social service, the government’s housing project is, in fact, a profit-making endeavour. The government has also turned its back on providing needed social services, like health services, to the people.

Meanwhile, repression of civil liberties and violation of human rights persist. The state claims even pregnant women, elders and children as victims. By 2008, reported human rights violations in the country have involved 889 victims of political killings, which include 98 women victims and 58 children. Among 179 cases of enforced disappearances are 29 women. Recently the military massacred 8 civilians including 2 children and 3 women, one of whom was pregnant.

Currently, there are 23 women who languish in jail for political reasons; the most recent illegally arrested and detained was Elizabeth Principe, a peace advocate and staunch supporter of the welfare of farmers and indigenous peoples in the countryside. There are also 8 women victims of rape by the military. The list of human rights violations continue, as these figures and cases have yet to include thousands of women and children victims of forcible evacuation due to massive militarization in the countryside. They experienced hunger, trauma and various forms of sexual abuse.

The military’s policy of rape and sexual abuse against women in captivity is indeed enraging. The spine-chilling torture and rape the military committed against missing students Karen Empeño and Sherlyn

Cadapan, and the sexual abuse experienced by 64-year old Angie Ipong in the hands of her military captors cannot and shall not go unpunished.

As the economic and political crisis escalates, coupled with the further intensification of the people’s protest, we can only expect – caution and condemnation notwithstanding – heightened attacks by the Arroyo government against progressive organizations like GABRIELA.

Our 8 March 2008 campaign is the persistence of the historic struggle and victory of the women’s movement as our own contribution to the intensifying struggle of the Filipino people. We will unleash a strong mass struggle of women against dire poverty, corruption and tyranny of the Arroyo regime.

We will give particular emphasis on exposing the grave condition of masses of women and the various forms of violence women experience in the form of poverty and VAW, as we also criticize and expose the Arroyo government’s hunger mitigation program for what it really is: A fake program by a fake President.

This March 8, we will conduct actions with the widest participation of masses of women to fight for their right to livelihood, housing and social services, for the future of their children and their families, and for their right against violence, especially state violence. We will unleash widespread and militant actions by women and the people against the Arroyo regime’s desperate grip on power.

Women are aware that only through their militant struggle, together with the rest of the people and under the aegis of a national democratic struggle, can the recurring and worsening crisis of the semi-colonial and semi-feudal Philippine society meet its decisive end.

On this International Women’s Day, let us vow to bring tens of thousands of working women in a militant action to contribute to the struggle of the working women of the world. Let us organize and mobilize women in the unions and factories, in farms, in urban poor communities, schools and offices around their local issues and concerns. Let us involve women from numerous localities through solid and extensive education, agitation, propaganda and local mass struggle campaigns. Elevating local and sectoral issues to a political level is an essential part of our endeavour. Our local, sectoral, national and regional actions shall lead to massive and militant protest march of women and children on March 8 against the heightening exploitation and oppression of the women of the world. This March 8 will also kick off GABRIELA’s celebration of 25 years of struggle and triumphs next year.

Throughout the world, the struggle of working women against exploitation is the key to our successful struggle against all forms of oppression. Only where women are members of the working force and have collective power will they learn to fight exploitation and oppression as women. We need to fight the oppression of women towards our full participation in the economic, political socio-cultural life of our community. The struggle of organized working class women will end not only women’s oppression but women’s exploitation as well.

Welcome to the blogsite of GABRIELA Philippines!  We hope this would help you get to know GABRIELA more.  Please feel free to post your comments.